You are here: Home1 / Boards2 / Senior Board of Practitioners3 / Mrs Widad Kawar 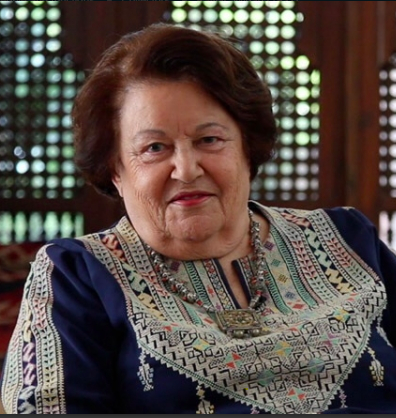 Internationally renowned art specialist and collector Widad Kamel Kawar was born in Tulkarem, Palestine in 1931. She received her education in the Ramallah Quaker School and at the American University in Beirut.

Receptive to her cultural surroundings, social stratification and its rich tradition, Widad, who comes from a Palestinian Christian family, showed keen interest and at an early stage, she informally acquired knowledge pertinent to traditional sewing, embroidery and textiles in Palestine. Following the 1967 war (The Naksa) Widad was confronted with a new reality of the loss of the second part (Eastern) of Palestine, which has now been occupied.

Anxious about the loss of tradition, Widad quietly embarked on a mission to preserve the cultural identity and heritage under occupation. Widad began to collect original examples of the attire of each geographical area in Palestine such as dresses, costumes, textiles, home decorations, as well as handicrafts, weaving and pottery and jewellery.

Having assembled a large Palestinian collection, Mrs Widad Kawar decided to transform her house in Amman (following her marriage) into a gallery making her collection available to the general public.

Her first-hand experience paired with the physical material she obtained has led her to have authored (and co-authored) a dozen of books about Palestinian garments, fashion, embroidery and costume jewellery.

For decades, Widad has been mentoring writers, journalists, researchers and museums from her house in Amman, which is always open and for many years has housed the collection in its entirety.

Widad Kawar is the recipient of numerous prizes and honours from various countries such as the Prince Klaus International Award for Culture and Development for “her invaluable contribution to securing global cultural heritage.”