You are here: Home1 / Boards2 / Senior Board of Practitioners3 / Mrs Tamam Akhal 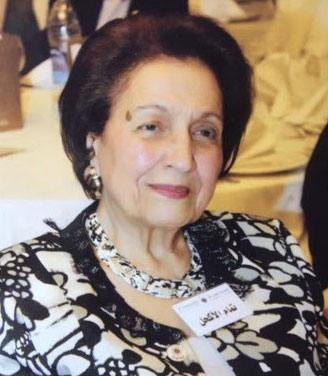 Born in Jaffa, Palestine in 1935, she was expelled during the Nakba/Catastrophe of the Palestinian people in 1948 and subsequently became a refugee in Lebanon. Despite the personal and national plight, two years later she perused her studies at al-Makased college in Beirut.

As a teenager, her early artworks were exhibited at official exhibitions in Lebanon. At the age of 18 she received a scholarship to study at the Higher Institute of Fine Arts in Cairo where she graduated in 1957. Simultaneously she obtained the Teaching Certificate in Fine Arts.

During her studies, Tamam participated in her colleague’s exhibition (her husband to be) and Palestinian fellow refugee artist Isma’il Shammout, which was sponsored and inaugurated by the late Egyptian President Jamal (Gamal) Abdel Nasser in 1954.

In 1959 she married her fellow alumnus, Isma’il Shammout, and marched on becoming the Palestinian ‘couple’ to be constructing a distinct visual narrative of the Palestinian Catastrophe (Nakba) and struggle for liberation.

Their exhibitions toured the world until they were forced to become refugees for the second time following the Israeli occupation of Lebanon in 1982 when they had to move in 1983 to Kuwait. In 1992 they became refugees for the third time in Germany following the Gulf War. Wishing to live closer to Palestine, in 1994 they decided as a family to move to Jordan and continued to exhibit with her husband who passed away in 2006. Tamam produced hundreds of paintings and drawings. Portraying herself as a ‘committed artist’. In 2002, Tamam stated that she does not feel the need to affiliate herself with any European art movement. ‘I can neither escape my reality nor express myself in a vague manner. I see no reason why I should be hiding my true emotions against oppression and injustice in a certain style under the pretense of being fashionable or modern’. Tamam resides in Amman and still paints and has been active in the art scene in the Arab world.