You are here: Home1 / Boards2 / Senior Board of Practitioners3 / The Late Archdeacon Rafiq Farah 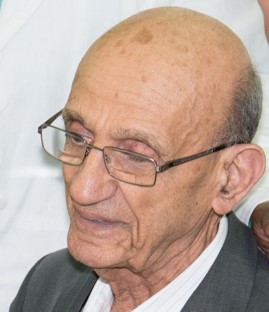 Archdeacon Farah was born in British Mandate Palestine in 1921. In 1945 he received his Bachelor of Arts degree in theology from the American University of Beirut and the Near East School of Religion in Lebanon. Archdeacon Rafiq wrote “The History of the Episcopal Church in the Anglican Diocese of Jerusalem 1841-1991” in two volumes in Arabic (published 1995) and a shorter history of the Episcopal Diocese of Jerusalem in English (published 2001). He also wrote two short books on the Christian Faith including the Anglican liturgical practice in Arabic:

He served congregations in Palestine and Jordan (1948-1965) including Jerusalem and Ramallah. From January 1977 to 1985 he served in Beirut, Lebanon at a time when the Civil War was raging and during the Israeli military invasion.

He was a delegate to the World Council of Churches Conference in Vancouver, Canada in 1983. In 1984, he was invited by the Archbishop of Melbourne for a tour in Australia and between 1986-1996 was an Honorary priest in the Southwark Diocese in Herne Hill parish in London (UK) for ten years before he retired to Toronto, Canada.