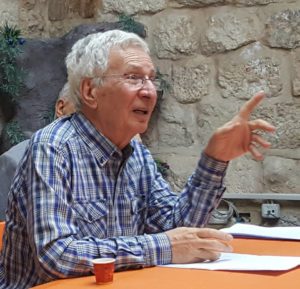 Professor Jamil Hilal studied sociology and philosophy at the University of Hull and obtained his MA from Durham University where he later became a Research Fellow and also taught. Later he was appointed Research Fellow at St. Anthony’s College, Oxford and at the Palestine Research Centre and Institute for Palestine Studies, both in Beirut. He has been a member of the academic Middle East Group in the UK since 1993. He is one of the founders of Palestine Economic Policy Research Institute where he has also conducted research. Other research posts have been at the Centre of Near and Middle Eastern Studies, School of Oriental and African Studies, Centre for Palestine Research and Studies (CPRS), Nablus, The Palestinian Institute for the Study of Democracy and at  the Development Studies Programme, the Institute of Law and the Centre of Women Studies at Birzeit University. Professor Hilal has held various teaching posts including at Durham University, UCL and at the University of Dar El-Salam, Tanzania. He was also Visiting Scholar to Carnegie Middle East Centre, Beirut.

He has served as consultant to the Palestinian Ministry of Labour in Ramallah and has been a Member of the Steering Committee of Social and Economic Policy Research Forum in Palestine. He is a member of numerous other committees and organisations including the Technical Advisory Committee to Palestine – the Human Development Report (UNDP & Palestinian Ministry of Planning), Technical Advisory Committee and the Research Committee to the Palestinian National Team to Combat Poverty in Palestine, the Consultative Committee for the Development Studies Programme, Birzeit University, Board of Trustees of Al-Haq Institute and the Palestinian Centre for Policy and Strategic Studies.