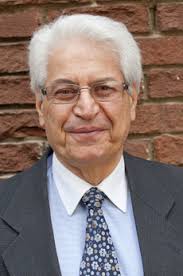 Atif Kubursi is Emeritus Professor of Economics at McMaster University, Canada. He taught economics at Purdue University in Indiana, USA, was visiting Scholar at Cambridge University, Fellow of the Institute for Social and Economic Policy at Harvard University, Adjunct Professor with the School of Environmental Studies at York University. He has also served as the Acting Executive Secretary and Undersecretary General of the United Nations Economic and Social Commission for Western Asia. In 1981 he worked for the United Nations Industrial Development Organization as senior development officer and was consultant to the organization throughout the 1980s and 1990s.

He consulted regularly with the UNFAO, UNCTAD, UNILO, UNESCO, UNEP, UNDP and many other international organizations and governments. He has authored 12 books covering topics such as Camp David, the economies and industrialization in the Arab Gulf and food and water security in the Arab world. He has published over 250 papers and technical reports in academic and professional journals.

He holds a PhD and an MSc in Economics from Purdue University, USA. In 1972 he formed Econometric Research Ltd from which time he has served as its President. He sits on a number of community and academic boards including Trans Arab Research Institute (TARI), Canadian Arab Federation (CAF), Wellwood, Raising a Village, Canadian Journal of Development Studies and Development Economics.