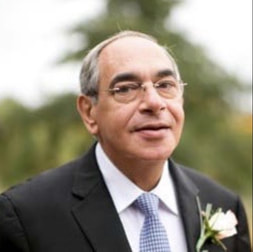 H.E. Ambassador Afif Safieh is Roving Palestinian Ambassador for Special Missions based in London and also serves as Deputy Commissioner for International Relations for the Palestinian leadership. Born in Jerusalem, Ambassador Safieh studied at the Catholic University of Louvain, Belgium and continued at the Institute of Political Studies, Paris. He has served in a variety of pivotal roles in the Palestinian diplomatic arena, starting his career as Deputy Director of the PLO Observer Mission to the United Nations Office in Geneva. In 1988 he was involved in the Stockholm negotiations that led to the first official direct American-Palestinian dialogue.

In 1990, he was appointed Palestinian General Delegate to the United Kingdom and in 1995 he was nominated as Palestinian General Delegate to the Holy See presenting his letter of credentials to Pope John Paul II.  He went on to serve as the Head of the PLO delegation in the US in 2005 and appointed Palestinian Ambassador to the Russian Federation in in 2008. Ambassador Safieh has lectured widely on Palestinian and Middle East politics. He was appointed researcher at the Centre for European Studies at the Catholic University of Louvain and was invited as Visiting Scholar at the Centre for International Affairs, Harvard University. Ambassador Safieh is one of the longest serving and experienced Palestinian envoys and brings his diplomatic skills, obtained from his life’s work and service in the three most significant political capitals: London, Washington and Moscow to all his current missions.