You are here: Home1 / Boards2 / Board of Patrons3 / Ambassador Stuart Laing 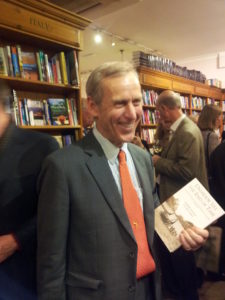 Ambassador Stuart Laing was Master of Corpus Christi College, Cambridge, since October 2008, after a distinguished career in the British Foreign Service with his service as Master coming to end last year. He specialised in Arab and Middle Eastern affairs, serving in Saudi Arabia and in Cairo early in his career, and then as Deputy Ambassador in Riyadh. He was High Commissioner to Brunei (1998-2002), Ambassador to Oman  (2002 – 2005) and Ambassador to Kuwait (2005 – 2008).

In addition to his duties as Master, Ambassador Stuart Laing researches and writes on Arab and East African history. He is co-author of a book on Omani-British history, “Unshook Till the End of Time”, and took an MPhil at Cambridge in 2012 on the abolition of slave trading in the Indian Ocean. More recently he has published a biography of Tippu Tip, an Arab ivory trader in east and central Africa in the late 19th century. At Cambridge he is a Deputy Vice-Chancellor, has served as a member of the University Council, and chairs various University committees.