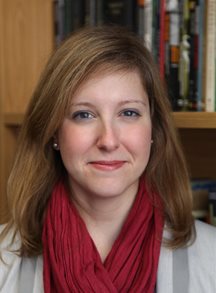 Dr Stacey Gutkowski is a Senior Lecturer in Conflict Studies in the Department of War Studies, King’s College London. She is co-Deputy Director of the Centre for the Study of Divided Societies, King’s College London and co-Director of the Nonreligion and Secularity Research Network. She is the author of Secular War: Myths of Religion, Politics and Violence (2013), and articles and book chapters on the relationship  between politics, war, peace, religion and secularism in Jordan, Iraq, Egypt, Afghanistan, the United States and the United Kingdom.

She is co-editor of the book series Religion and its Others: Studies in Religion, Nonreligion and Secularity (DeGruyter). Dr Gutkowski is currently involved in two main projects. One critically examines the generational memory of Generation Y ‘secular’ Jewish-Israelis, with a particular focus on ethno-religious nationalism and occupation. She is also researching inter-faith encounters among Syrian refugees based in Jordan and Lebanon.